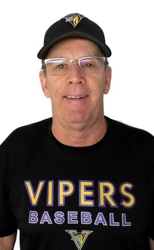 Coach Paul was born and raised in Pittsburgh, Pennsylvania. In the beginning of Coach Paul’s 60+ yeas of baseball experience, he was a standout pitcher at Central Catholic High School. After High School, Coach Paul earned the opportunity to play college baseball where he went on to pitch for Gannon College in Erie, Pennsylvania. After college Paul went on to play for the US Army Baseball Team while serving our Country and stationed in Germany. After his service time Coach Paul spent 10 years pitching in the semi pro leagues before he began his coaching career. He started training youth teams and players in Pittsburgh and in the West Palm Beach area. In 1998 Coach Paul began coaching High School baseball in which he continues to today at Suncoast HS. 2016 will be Coach Paul’s 3rd year working with the Vipers pitching staff.